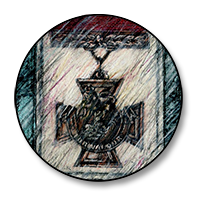 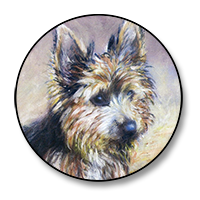 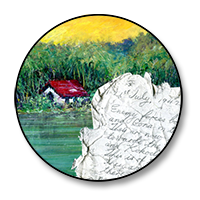 Select a link above to view more

“I was born in Brunswick, Victoria, just up the road from the Carlton Football ground. I loved drawing from a very early age. My brother Leigh and I spent most evenings drawing on huge sheets of paper on the kitchen table. I also loved comics, especially The Phantom, and a long forgotten western hero called Kid Colt. The drawings in both were brilliant! I would copy them over and over, which is really how I learnt to draw.”

“I had my first part-time job when I was 14, delivering bread and milk (I was allowed to take home as much bread as I could carry on my bike – three loaves stuffed up my jumper and two under my right arm. Mum was rapt! Extra bread and milk helped us out a lot in those days). After that, I worked as a petrol jockey on weekends (as soon as I started my shift on Saturdays, my brother and his mates would pull into the servo trying to get free petrol for his old FJ Holden!).”

“But as fate would have it, my older brother Leigh was a good drummer and taught me how to play (just to stop me using mums pots and pans as a drumkit-very noisy). After school each day, I’d play along with songs by Wilson Pickett, Otis Redding, Chuck Berry, The Beatles and the great Bob Dylan. I went on to spend most of my teenage years pretending to be a drummer in various rock bands, and trying my hardest to sing like John Lennon.”

“I started studying art in year ten and went on to study mural design and painting at C.I.T. (now Monash, Caulfield Campus). I skipped classes two days a week to work as a cleaner to pay my way (somehow I still managed to pass though). I remember a few of us in the painting group were invited to lunch by the late great Fred Williams (at his house/studio). It was just amazing to see the paintings and prints he was working on, to see how he worked and to have a chat. He was a really nice guy and a great influence on me as a young painter.”

“After art school, I did National Service for two years, serving with Survey Corps and then Training Command (a slouch hat on my strange looking head wasn’t a good look!). After the army, I completed a Diploma of Education, but by now, the band was doing some good gigs, so my choice was to either work for a living, or live the rock’n’roll dream. Not a hard choice. What a life! For one gig, we were flown to King Island and you could see the giant waves in Bass Straight not far below us. The pilot let our crazy guitarist Ken take the controls for a while-what a buzz!”

“As the mid seventies rolled around, I thought I should get a ‘real’ job, and landed a position as designer and illustrator for The Education Magazine and Pursuit Magazine (still playing drums though, in the bands Centerfold and then Piranha. You can never get drumming out of your blood once it’s in there!). I also started writing songs for the band and still write today with my old mate and guitarist Ken Spencer (he plays a good blues harp too!).”

“In 1981 I started freelance illustration for various other publishers including Penguin, Rigby, Brooks Waterloo in Australia, and Shortland in North America.  My friend Ann James gave me my first picturebook to illustrate at the time, called Drenched. A great little story about a little boy caught in the rain after school. From that moment on I was hooked on picturebooks!”

“At about the same time, I became involved with various wildlife conservation groups like the Australian Conservation Foundation and The Wildlife Protection Council of Victoria. I did a lot of illustration work for these groups and others, which led me into writing my own stories concerning conservation and protecting native species. It has now become a lifelong passion. Prayer for the Animals (Lothian) was the first book, and I worked for the first time with the brilliant editor Helen Chamberlin, who has been my editor ever since.”

“In 1982 I held my first solo exhibition of paintings and drawings,at the Artists Proof Gallery in Richmond. I love painting and still paint and exhibit every couple of years (see the painting link at the top of this page). I still get the same buzz as I did as a little kid at school, opening the paint pot and just getting stuck into it!”

“My absolute passion though, is writing and illustrating children’s books. This also takes me all over Australia doing presentations and workshops in schools and at literature festivals (this fits in nicely with my eternal quest to find the best coffee shop in Australia!).”

“Many, many thanks to my brilliant editors at Hachette/Lothian, Windy Hollow Books and my daughter Leonie Scanlan.”

“The winner of the Dromkeen Medal, Libby Ahern, has been a huge supporter for many years, and together with the help of many others, the Yea MARC Literature Festival has been a huge success. We set it up six years ago to support the kids up there who lived through the devastating bush fires. Many of the kids still need all the support they can get. This year will be no different, so thanks Libby, all the teachers, authors, illustrators and especially Pam Horsey, for their hard work and dedication.”

“The Dromkeen Collection of Picture Book Art is open again, thanks to Bernadette Joiner and husband Tony. We are doing workshops with schools in residence again – beautiful grounds and rooms full of light and learning! SCHOOLS – GET ON BOARD!”

“I have also been doing volunteer work for a charitable group called CLAN (Children’s Literature Australia Network). Our aim is to publish books and to get them to disadvantaged children/schools when and wherever we can. The first book is The Timor Sparrow, and is one of six books I have written for the project. The Timor Sparrow is being printed in the Tetum Language of Timor Leste.”

“I know it’s a busy life we all lead, but if possible, try to put some time aside to do a little for the environment. This in turn helps our wild creatures. Remember, the smallest things are the most important and together, we can change things. Also think of your family and friends. We take them for granted some times, but would be totally lost without them.”

“I want to thank all the schools and festivals that have kindly invited me along to do workshops and presentations this year, and the wonderful enthusiasm and support I have had from everyone over the last few years. Good luck to all the budding storytellers out there, and especially to all the people who read our books.”

“Without you, we wouldn’t be here!”